From QPR ProcessAnalyzer Wiki
Jump to navigation Jump to search

The process mining concepts that are used by QPR ProcessAnalyzer, are defined in this page and their relations are shown in the diagram.

Case is an instance in the process which flow is analyzed. Cases can be chosen differently depending on the analysis. A case consist of a sequence of events describing how the case flows through the process.

Event describes that something happened in a specific time. In QPR ProcessAnalyzer, event represent a specific timestamp and thus it does not have a duration. Still, it's possible to store duration information as an event attribute to be used in the analyses. Each event belongs to a specific case. Each event has an event type which describes what what happened in the event. Events may have following event attributes, for example:

Event type describes the type of activity that an event represents. All events have a specific type, e.g. Order sent, Goods received or Invoice paid. In a flowchart, the process is shown as a flow from event types to other. Each event has specific number of starting and ending flows, i.e. transitions to and from other events (which is visualized in the flowchart).

Variation (or variant) means the sequence of events that a case goes through. If another case has different events or they are in different order, the case belongs to a different variation. Duration between the events or occurrence timestamps don't matter in regards to which variation a case belongs to. In theory, in an eventlog there is a minimum of one variation and maximum number of variations equals the case count.

Flow is a transition from an event type to other event type, and it describes all transitions that have occurred in all cases in the eventlog. There are also start and end flows, meaning case start and case end, and thus in the starting flow there is no starting point and in the end flow there is no ending point. Flow means that there are no other events occurred between the start and end event, thus the ending event occurred directly after the start event. Note also that flows always has a direction: flow from A to B is different than flow from B to A. Starting and ending event types can be the same.

Path is a sequence of events of specific types that a case goes through. In contrast to a variation (which contains all events in a case), a path only contains part of the event sequence. For example case with a variation A->B->C->D->E contains e.g. paths A->B->C, B->C->D and D->E.

In addition to the eventlog, cases and events can have additional information related to them. For example, a case in a sales process might have information about customer, region, sales revenue, sold items, or an event might contain information who performed the event and what was the geographical position of the event. These are examples of case and event attributes.

Project is a collection of related dashboards, models, datatables, scripts and secure strings, e.g. they belong to the same analyzed process. Projects can also be created hierarchically by adding child projects to a project. Projects are also import for the access control, because user rights are set in the project level. 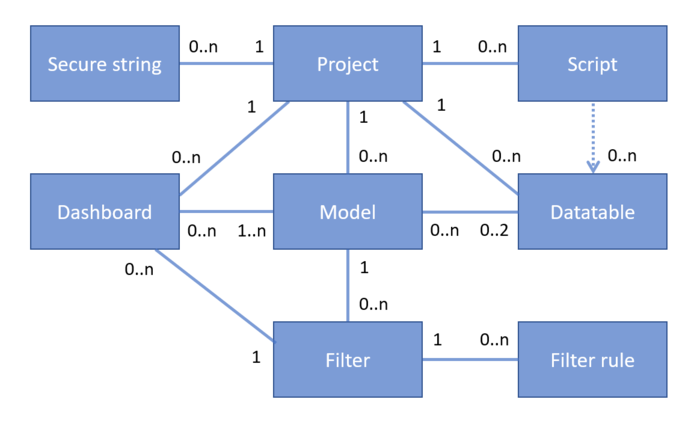 Model consists of a list of events and cases, forming an eventlog. Separate models should be created for each analyzed process. Processes can be e.g. Purchase-to-pay, Quote-to-cash, Request-to-resolution or Idea-to-product. Models belong to projects in QPR ProcessAnalyzer, helping to organize content.

Filters are used to choose specific parts of a model for more detailed analysis, i.e. slice the model in a smaller part. Filter consist of one or more filter rules.

Note that filters are only for filtering eventlogs. The expression language provides more generic filtering capabilities for any objects.

Datatables are a generic storage of tabular data. Datatables can be used to store events (eventlog) and cases (case attributes), and in addition any intermediate results needed by ETL. Also additional data needed by dashboards can be stored to datatables.

Secure strings are texts which need to be kept secret, and passwords to be used to login to the datasources for data extraction can be stored as secure strings. Secure strings can be added, changed and used in scripts, but their contents cannot be viewed, keeping the data secure.